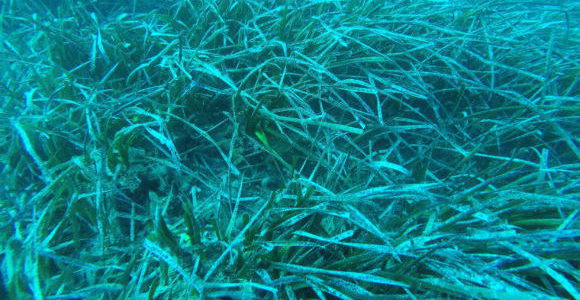 Carbon dioxide is a gas that is part of the natural cycle of carbon through the biological processes of respiration, decomposition, erosion form the rocks, and volcanism. Blue carbon is a term that refers to the organic carbon captured and stored for long periods of time (fundamentally, buried) by marine ecosystems. This concept has triggered the development of different research lines in recent years over the last decade. Its importance lies in the process of carbon seuqestration and burial by coastal ecosystems dominated by vascular plants, and the positive consequences implications of this phenomenon that are obtained from this process at in controlling the excess of atmospheric CO2 globally.

Within blue carbon sequestrated by the sea, more than half occurs in coastal ecosystems such as marshes, seagrass, mangroves and estuaries (Nelleman et al., 2009). On the one hand, at the ecological level, we have that forest of marine angiosperm form biodiversity refuges for other species (Serrano et al., 2017) at the same time that with their rhizomes they avoid or slow down the soil erosion processes. On the other hand, these forests also capture atmospheric CO2 with photosynthesis, where carbon is stored in the form of biomass and necromass (Mazarrasa et al., 2015) or drived to the sediments as oxygen is released into the environment. This function represents a significant contribution the mitigation of climate change because it contributes to the reduction of atmospheric CO2, a gas that contributes global warming (López-Merino et  2017). 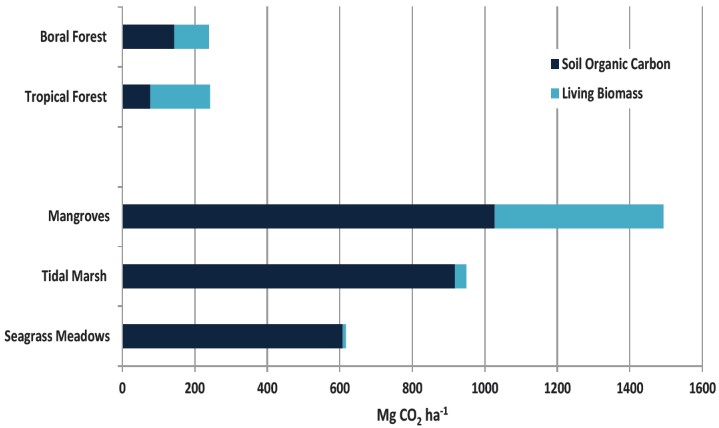 Graphic 1. Mean carbon storage above and belowground in coastal ecosystems versus terrestrial forest. Searched at http: //thebluecarboninitiative.org/blue-carbon/ on 13-02-2017.

That is the reason why conservation is of great importance. Some of these habitats are in danger of degradation, that would involve the release of carbon they store and that coupled with oxygen, would provide high levels of CO2 that would return to the atmosphere (Lovelock et al., 2017; Rozaimi et al., 2016).

This article focuses in seagrasses. Seagrasses are flowering plants that grow in marine and estuarine areas. They are common in intertidal and shallow waters to depths of about 20 m. where there is sufficient light for them to grow. Seagrasses meadows are primary producers growing on light, nutrients, water and CO2. With this process, they transform matter from inorganic into organic, acquire the energy the need to function and release O2 in the environment. Seagrasses are found world wide with the exception of polar and sub-polar areas or near the influence of the plume of large rivers. Tropical but mostly temperate environments, are preferential for seagrasses, of which the Mediterranean Sea, the Australian coasts and the Gulf of Mexico are can be considered hotspots. The dominant species in the Mediterranean Sea is the endemic Posidonia oceanica.

P. oceanica has rhizomes that can grow vertically or horizontally. Leaves are organized as a shoot of about 8 and can exceed 1m of length. P. oceanica also has roots (that can be at least 70 cm long), flowers and seeds, and a vascular system. The shoot density of the meadow can exceed 1000/m² near the surface and typically decreases with depth (less than 100/m²) as light becomes scarcer. They grow up to 40 m deep depending on water’s transparency, usually on soft substrate and more rarely on rock. Reproduction in this species is typically vegetative, with occasional episodes of sexual reproduction by flowering. They provide several ecosystem services, including the sequestration and storage of carbon as organic matter. Some of this organic carbon (Corg) is contained in the living plants, but the majority is buried in the soils underneath the meadows. Seagrasses occupy less than 1 % of the ocean’s surface but sequester 27.4 Tg of carbon (in the form of organic carbon) per year, namely 10 % of ocean’s sequestration in sediments (Campbell et al., 2014). Carbon is maintained for hundreds to thousands of years in the soil under the seagrass, representing a very effective carbon sink. Canopy structure, water turbidity, depth of growth, sediment properties, species specificities, among other features, will affect the carbon sequestration capacity of seagrasses:

In fact, when coastal habitats are degraded or transformed into another landscape, the carbon contained in the sediment is destabilized or exposed to oxygen, which results in an increase in the microbiological activity releasing carbon into the atmosphere or into the water column. It is estimated that the degradation of the coastal environment results in a release to the atmosphere of 0.15-1.02 (billion tonnes Pg) of CO2 per year (Pendleton et al., 2012).

Seagrasses meadows can have a significant role in contributing to the regulation of the atmospheric concentration of CO2 which comes mainly from human activities.The need of the implementation of management measures to preserve seagrasses ecosystems is obvious. It is clear that policies encouraging the sustainable management of coastal ecosystems could significantly reduce carbon emissions from the land-use change component, as well as to sustaining the many other well-recognized ecosystem services provided by coastal habitats.